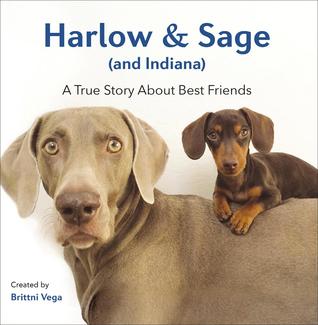 The ultimate holiday gift for dog-lovers everywhere, featuring "the most adorable best friends in the world" (Buzzfeed)

Introducing HARLOW AND SAGE (AND INDIANA): canine best friends who are taking the digital world by storm. Originally created as the Instagram account @harlowandsage by the dogs’ owner Brittni Vega in March 2013, the world first met Harlow (an uber-expressive pooch that brings to mind William Wegman’s iconic Weimaraner photos), and her small and mighty sibling Sage. When Sage passed away in September, Vega brought Indiana, a Dachshund puppy, home as a new addition to the family. Vega’s heartwarming and beautiful photos chronicle Harlow and Sage’s, and then Harlow and Indiana’s antics—from their love of Meryl Streep to their distinct connection with one another displayed through their daily cuddles.

Today, in addition to the Huffington Post’s declaration, “now we are obsessed,” the HarlowandSage Instagram account has over 200,000 obsessive followers and one photo can garner upwards of 30,000 ‘likes’ within hours. This expressive Weimaraner and her two friends the ultimate pet phenomenon of 2014.